Some bees may sleep in a flower, but other bees simply desire a somewhat sheltered place above the ground, without relying on a flower’s amenities (pollen, nectar, self-closing petal doors!)

This solitary cuckoo bee is a case in point. I took this series of photos over the course of several minutes last April (there being no bees here just yet… even heavy snow just last week!) After clamping its mandibles onto that particular rhododendron leaf, the bee began an extensive self-cleaning process. Those mandibles are powerful indeed… enough to suspend the bee easily from the rhododendron leaf, freeing it to move all six legs and both wings easily at any angles to aid in cleaning.

It spent the night there without hiccup… I visited in the morning, and the bee was still clamped in position, body sticking straight out parallel to the ground, suspended seemingly weightlessly by its mandibles. An odd way to sleep, but it looks as though it works well! So now I look for bees clamped to leaves under “awnings” of other leaves, as well as bees tucked away inside flowers overnight :) 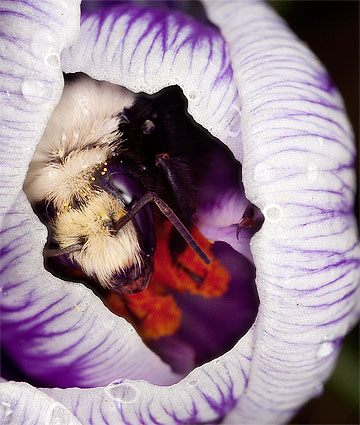 A closed flower is the perfect spot… a place to sleep, nectar to drink, pollen to enjoy… what could be better for a bee?

On March 1, the end of a nice sunny week filled with bees in crocuses, I saw a very large bumble bee slowly hauling itself from one crocus to another, clearly slowing down as the light faded and the chill in the air became more noticeable. After some half-hour of labored clambering, she settled in one particularly large, sturdy looking crocus.

As night drew closer, and the crocuses began to close, this bumble bee stayed within its flower as other bees, among them mining and honey bees, flew off home. By evening, all I could see was one beady, multi-faceted eye staring up out at me from the small hole in the flower where the petals meet when closed.

The next day brought rain, and lots of it. In fact, it continued to rain each day until March 4, and each morning and evening when I checked, there was still a beady eye to greet mine peering in (or at times a fuzzy bum!) March 4 brought a bit of sun, but was still in the low 50s. The crocuses did open slightly, but the bumble bee never left its flower, just remaining huddled, cold inside.

March 5 brought similar weather, but slightly warmer, and the bumble bee bumbled actively on her crocus, still showing no signs of leaving, instead having the odd sip of nectar, dangling off the petals, then clambering back into the flower’s center again. As the crocuses began to close in the evening, the bumble bee waited for her crocus to close… but the day’s bumbling had taken its toll on one of the petals, which was bent towards the ground.

Knowing it would rain in the night, I gently nudged the petal back into shape, so that it could protect the bumble bee happily for one more night :) The next day, after a cold night of rain, the sun came out and the bumble bee buzzed off in search of fairer crocuses across the patch… after spending 5 nights in one crocus! 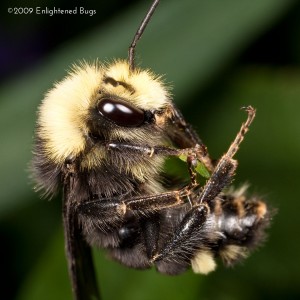 This bumble bee was one of at least fifty or so small bumble bees covering a purple aster (a bush about four feet tall all round, one itself of four or five others with similarly large clouds of these same small bumble bees).

This particular bumble bee had—like countless others—perhaps purposefully overstayed its time past sunset on this late September afternoon, and was now incapable of flight, bumbling like so many others from flower to flower in search of a good place to spend the night (to awake to nectar first thing next morning).

In the middle of some particularly arduous bumbling this bee fell, plummeting through the air with legs outstretched… and as it happened, caught hold of a thin blade of vegetation.  Upon the end of which this poor little bee now struggled piteously before my gaze, only energy enough barely to try to hold on, and nowhere else to fall but the ground.

I paused for a moment (taking this picture), then quickly found a bumble-bee-free aster and bent it towards my bee in need.  It flailed all the more wildly as the flower approached, and seized upon it as soon as it was barely within reach, forcibly pulling itself to safety in the upper flowers once more :)